The Claytons Run…………… “the run you have when you’re not having a run”.

The first cruise for the year is the one held on the last Sunday in January for members who do not go away and are at a loss for things to do in their MR2. Named the Claytons Run after a popular TV advert for Claytons a non-alcholic drink.

This year the Claytons Run took us on a cruise through the town of Lancefield and around the superb Burke and Wills Track. While this run has a few long straight stretches, it compensated for the many hills, twists and turns that are tucked into the middle of the run.  Morning tea at a most picturesque location and lunch was at Di Caprio?s restaurant in in Gladstone Park. 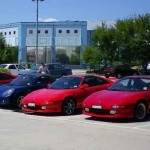